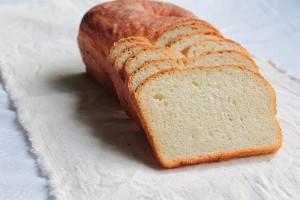 Been craving a simple, big chunk of toasted white loaf bread for a while; well, to be more specific, I think I’m craving Sourdough, but I still need to plan a specific week to set enough prep day time aside for that. But really good white bread works too, and it’s been a while since that Wheat Bread, so I think I’m in the clear to bake some off.

I didn’t realize that this is actually what Milk Bread is (though it also goes by Pullman, Pain de Mie, and other terms), so long as it’s made with milk of course. Which comes to the fact that my book offers three variations, which basically just change out water for milk/buttermilk/etc and butter for margarine/shortening/vegetable oil/etc. White breads can be made with any variation of these ingredients at the same weight and ratio, but there will be obvious stylistic changes to the final product.

For my own interests, I tried Variation number 3, the only one that actually changed the Method as well, adding in an extra ‘Sponge’ stage with the flour and yeast, since I want to try getting as much of that yeasty-developed flavor as I can. The author mentions that this effect is likely minimal, if not seen at all, but no harm in trying right? Besides, it should help the crumb as well with the extra fermentation. I’m also going to use purely milk and butter with this, just cuz I like the idea of making ‘milk bread.’

Finally, I’m testing out the theory today that my Loaf Pan is so big it needs a whole recipe, or at LEAST 2lbs, of bread dough to make a properly shaped final product. Plus this keeps me from needing to cut this in half and deflate the dough even further. 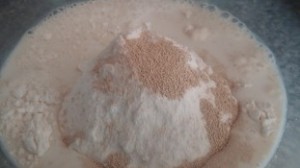 I need to remember that grilled cheeses made with THICK slices of bread need time in the oven to actually get the cheese nicely melted; and as such, the first side should be flipped a little early so it doesn’t get overly dark and crunchy. But that has nothing to do with making the bread. Because I’m not sure what else new I learned this time.

Well, I guess all the stuff about the different names, and that I can make some easy substitutions to these recipes without RUINING it, just getting a different outcome. Thus a reason to retry this style for the blog; perhaps I can then do a smaller loaf and some sort of buns just to switch things up a bit.

You know what I wanna talk about is the flavor. Besides the whole simple white bread thing, there’s a certain, sorta-subtle taste in here that I’m not usually used to with sandwich bread. And it’s not just simple yeasty; that bread development on its own is easy to pick out after having experienced it in other things. No, if anything, this reminds me mostly of flavors I’d seen in the Portuguese Sweet Bread, just much more toned down. Obviously I think part of that can contribute from the fact they both had an egg wash on the crust, but as for the inside, I’d have to assume that result is due to the combined flavor impacts of the yeast with the enriching ingredients; aka, the egg yolk, the butter, but I think most importantly the milk since it’s the only one with any noted presence. The former two really only had the tiniest amount in there. I find the result intriguing, exciting, and the next time I make this bread I plan on using just Water and Shortening, potentially without the sponge stage, and seeing if it makes an obvious difference, which it should.

But at some point, I also REALLY need to make a bread with buttermilk; I’ve seen it as an option a few times already, and I reeeeeeeeaaaaaallllyyyyyyy want to see what results it gives.

By the way, didn’t mention this earlier, but recipes like these can also be used for Dinner Rolls, Hot Dog Buns, and other such things. Just need to divide smaller, shape differently, and bake at 400F for usually 15 minutes.

Oh, and what the hell, I swear I’ve got better crumb an bigger holes in a damn sandwich bread than I’m getting in my baguettes and ciabattas! What’s up with that!?

I’ve convinced the Sandwich Breads to be on my side! Now if only they can help me convince the hearth breads to not be so stuck up…