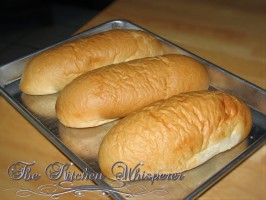 So this particular installment of the ‘bread battling project’ had an interesting inspiration and twist. Had a plan for a Sunday night dinner+shows evening with sis and friend, to which she shared the idea of this ‘philly cheesesteak lasagna’ recipe beforehand with notes saying how we should make this for our night of fun! So, in figuring out what I could make that would go along with it, and while keeping to one of my project needs, I came along what I still think is a rather brilliant idea. Why not make garlic bread… out of Hoagie Buns/Rolls!? Still have the cheesesteak theme, but it’s also a typical side with lasagna, win-win!

But of course the steaky-cheesy-pasta casserole didn’t get made, apparently it was an idea for ‘some potential weekend’ and not THAT one, so I had leftover hoagie buns that needed to be used before all going stale. Which is fine though, because we made sandwiches with them anyways… some pretty damn good quiznos-style griddled ones too.

It’s always nice playing with simpler bread styles every now and then I find, don’t have to think about making sure that I add in a new ingredient properly, worry over degassing too much in some intense shaping process, or all the hassle of trying to hearth bake perfectly in my home oven setup. Just yeasted water, flour, other stuff, knead it right and make sure I shape it to what it should look like and don’t over bake. Lets you get more used to basic techniques and also see where you REALLY may need work, and where you’re doing well so far.

As for the hoagie recipe itself, there’s not much to say. There are various ones which shift in proportions back and forth, as practically all bread recipes tend to do depending on who’s making them. But what stood out to me was the addition of sugar and butter; nowhere near enough as a fully qualifying ‘enriched dough,’ but still more than other bread can be. The sugar itself really seems to play a role here, with enough to kick that yeast into high gear, definitely a one-day bread designed for the quick and easy requirements needed by sandwich makers everywhere. Also, this particular recipe was listed officially as “Soft and Chewy Hoagie,” which I’m not sure if that’s supposed to distinguish it from OTHER hoagie recipes out there or if that’s simply the natural aspect to the bread. What I CAN say is that it’s basically the same as a white dinner roll… in all the best ways.

Intensive de-gassing after the fermentation period won’t affect how much it proofs, so I should feel more confident in letting myself do this with other future breads in the hope of getting a more ideal structure.

Need to work more on my shaping skills for consistency, wish I knew some proper ‘tricks’ to it… maybe I’ll google it some on my next project. But more realistically, it’s probably going to have to come through repetition and practice. So whenever I start making more than one loaf of bread every week or so. 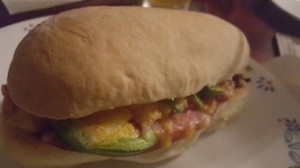 And finally, that these make the simplest, most satisfying and guilty-pleasure hoagie… spread bread in half, pile with desired meat, veggie, and sauce fillings. Cover it in cheese, making sure BOTH buns get a layer [or at least get butter and garlic on the other bare bread] and broil until… well… you see the picture. Tell me you don’t want to fold that and eat it, I dare you.

Truthfully, I’m rather backed up on blog posts I have to get out, and I’m taking a nine-day-long vacation away from computer-access in a few days, so even if I COULD think of something to say here I’m not sure if I have the time! I swear I’m not trying to brag and sound snotty or anything!!

It adores my appreciation to ‘what’s inside’ but still thinks I need a better fashion sense… ie it wants me to shape it better in the future.