When it comes to the dishes in this French list, my decision for when and why I make particular ones are usually just happenstance with how they fit that week/situation. But a few of them actually have plans built around them, fun ideas I got excited about soon after I began studying this collection of classic recipes. Some of it’s based on occasion/time of year, while others are purely on how I’d make it, or something else.

In particular I’ve been looking forward to a good period to go through with an idea I had for the highly simplistic, royally rustic meal that was ‘Baked Camembert.’ Grab a really good wheel that I’ve wanted to have for a while, put together a baking dish of it, then bring it to a wineI know which would bake it for me and enjoy with family, the people at the bar, all accompanied by their personal garnishments and some wine we’d order. So I finally found a good time to do that this weekend… and of course the place was unexpectedly closed with no warning or reason given. Well that’s my luck. But I still had the cheese, so might as well just put it together at home!

The cheese itself is a Normandy or Pays d’Auge creation, supposedly developed by farmer Marie Harel in the town of Camembert during 1791 after following advice from a priest from Brie who she had given refuge, it being the French Revolution and all. Though most of its origins, at least towards what we know of it today, came through the industrialization process of the 1800’s, like the creation of the signature round wooden box in 1890, the container ‘sponsored’ by Napolean III, used to help it ship and travel to different countries and continents like America, where popularity boomed. Though it really centered itself into French culture during WW1, when issued to troops as part of daily rations.

Proper camembert, traditionally and legally speaking, is always made with UNpasteurized milk, which is remarkedly seen to always taste better than the convenient and ‘safer’ (damn US laws, literally making it illegal to obtain any proper, delicious form of fresh milk unless you’re squeezing the cow yourself) pasteurized versions.

Ok, done with the textbook description, let’s get to baking the stuff! 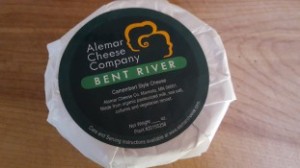 The Cheese: Well, I’ve already talked about the cheese itself, and finding it shouldn’t be too difficult for any proper artisan cheese section/shop; I’m sure you have a favorite to get the good stuff from. I’ve actually been dreaming about doing this dish for a while though, because there’s a local farm that makes a camembert-style cheese that I’ve had on my mind ever since I saw this on my list of must-makes. So I had to finally get a whole wheel to bake into melted hot cheesy goodness.

Accompaniments: baked rind cheeses are always good with some garlic and onions, that’s how we do our brie, but I want to stick to something more countryside, so garlic and rosemary on top like one of the recipes I glanced at. As for what to eat it WITH, besides bread of course, I’m not sure what all is traditional, if anything. Usually freshly minced shallots, some capers, cornichon pickles, and other similar items are seen on the side for a variety of simple French dishes like tartar, fondue, and that dish of Raclette I made a while ago. I personally had this ripe tomato from my own pot that begged to be used soon, so I just had to use it, cut through the funky-creamy fat of the cheese with some natural umami-assisted acidity. Plus it’s classic; melted cheese, crunchy bread, and tomatoes, sound familiar? But you can always use whatever you fancy and have lying around, if not just eat it plain with bread! That IS the wonder of meals like this.

Okay, so I just looked at the Buzzfeed recipe to double-check procedures, I’m quite used to simply baking brie ya know so there’s nothing in-depth I should need, and that’s when I saw the directions for scoring the cheese. They also have you remove the top lid for service. Well you know what? That recipe creator can go screw himself, cuz you can see the result. And yes I probably overdid it a little bit, but that was well after it turned into a cheese pool; if my guess is correct and their ‘ideal’ is to bake until just warmed throughout, then that’s just plain stupid. If you’re going to bake cheese, then you need to BAKE it; that means a hot, gooey center, rind that has gotten that crispy golden look to it, something really sinful, and that needs time. It should thus be scored very LIGHTLY on top, probably just in the center (did some research, apparently it is important so as to let the air/steam out while cooking), but that should be it. 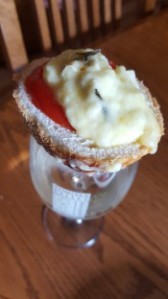 Now I simply know that I need to leave the cheese completely untouched so as to ensure it stays in one piece during this process. Not that it really changed the experience in the slightest. Because it was just soooo good… like brie but with more of that fatty cream flavor, and surprisingly enough a little more subtle on the funk and knutty-herb-farmhouse flavors, a ‘fresher’ cheese flavor that had yet to get to that really ‘aged’ feel. It took me and my mom quite some effort to make sure we left even a bit for dad, because once that cheese got on bread, especially with a piece of just-ripened tomato from my pot, that just ended up an almost perfect afternoon treat. Everything I love about baked brie dinners but a little more concentrated.

Camembert and honey are certainly a match made in heaven, though so is honey and most cheeses if you get down to it. The distinctively cloying fat and somewhat salty properties of cheese get balanced beautifully with anything sweet, thus its often inclusion in or close to the last course of a proper French meal. So why not take advantage of this affinity to highlight a nice bottle of classic Honey Wine, letting its usually rather simple flavor, aroma, and body contrast the camembert’s properties while letting its own complexities shine through. But one needs to ensure they get one of the lighter, slightly sweet and refreshing meads; avoid ones

like that which I used for Raclette, which was rather thick and heavy and would be too heavy for any but the rich and more pungent cheese.

So far, probably my favorite Minnesota winery, Winehaven celebrates the colder Northern US history of fruit wine, made long before we found ways to grow decent wine grapes or developed hybrids for the right areas, with a small selection of bottles like raspberry, rhubarb, and of course Honey Wine. They’ve got a lot of reds and whites made from California and Minnesota-exclusive varietals too, and not done too badly either, but that’s a discussion for another day.

I got this bottle as a Christmas gift from the Sis, not too exciting as I’ve had it before, but have been saving it for the right occasion nonetheless. And here I was, being forced to bake the camembert at home instead of these other plans I had, with no bottle pre-picked out at my disposal… and yet one of the almost perfect combos are right at my feet! Chilled, it was a little lighter, still sort of medium-bodied with the thickness, which was just within the edge of acceptable when eaten alongside a big, hot glob of cheese on bread. And I love the expression it has with that musky, spicy-floral side of honey that comes through, a sign of decent honey and clean, quality attention to the winemaking. Was it the greatest thing ever? No, probably not, but for Mead it was rather good and refreshing, and didn’t clash with the cheese when the two combined on the palate. 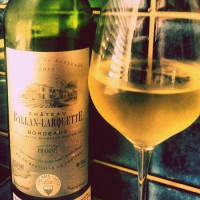 What I was HOPING to have this evening by sharing the dish with family at a friend’s restaurant, but alas had to rely on what was in house! But something young, clean, without any particularly ‘distinguishing’ features like chardonnay and Riesling can carry, a pure white wine with enough body to match the cheese and a refreshing nature to cleanse the palate. For me I think a decent Bordeaux Blanc would fill those qualities, along with some little green, white fruit notes from the sauvignon used that would cut nicely through the subtle funk of the rinded cheese to compliment its grassy qualities, without being too strong and overpowering. It may not be a proper regional pairing, but right now it peaks my cravings; though on that note, a nice snifter of Normandy Calvados wouldn’t be too bad either…