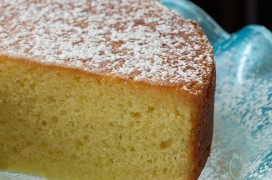 I do love when a recipe ends up convening with an appropriate get-together, and with a day of hangout following my cousin’s birthday it only made sense to tackle one of the many cakes on my list. To make things even more perfect, one of the more simple ones I’ve been meaning to make comes out like the classic birthday-favorite white cake, but of course with a little twist and some added flavor. French Yogurt Cake takes a simple sweet batter and mixes in that classic Mediterranean ingredient for added moisture, texture, and a little bit of tang in the cake itself; definitely helps with leavening too when combined with baking powder.

There’s little history to find on this, but what is known is rather interesting; not because of anything that ties into world events, local sourcing requirements, economics, fun accidents or whatever, but due to the homey simplicity. For one thing, the actual French name of the cake is ‘Gateau de Mamie,’ or ‘Grandmother’s Cake.’ This is due to the long habit, truthfully I don’t know how far back it goes, of this recipe being made by old French Grandmothers; or maybe it was just one generation that did it and it stuck. What makes it stick out is HOW they made it though. First, yogurt in France was actually bought in these small glass jars, like many things were packaged. This was dumped out into the bowl… and the jars re-used to measure everything else! So instead of weighing or leveling things by specific milligrams or liters, it was ‘one jar’ or ‘two jars’ etc, thus the recipe was ever a simple game of proportions, easy to make no matter what size jar or measuring devices one had on them.

Which made it easy to do recipe conversions; for though many would try to justify if these jars were exactly ½ cup or more, less, etc, at the end of the day all the ingredients just had to stay in these proportions. Most of the ‘conversions’ I found were exactly the same; and considering the jar-based source of this recipe, I almost wonder if it originally came off a company’s package a-la the famous Hershey Chocolate Chip Cookie. That said, there was one which looked absolutely delightful, the only difference being an extra egg, and I can’t say no to that.

Obviously I don’t have, and am too lazy to go find, the little French yogurt jars this recipe is based off of, but any decent Greek or Greek-style will do. Though I didn’t realize the one we had at home was Vanilla flavored, as opposed to plain, until I started, and I’m rather squeamish with the idea of any ‘flavored’ yogurts… make one wonder how properly yogurt-ish it actually is. But at least vanilla is simple, and I could just use THAT instead of adding extract like recipes usually do.

Speaking of additions, there is of course the classic ‘vegetable oil’ necessity in the recipe, providing a full liquid fat for texture and moisture. A few recipes allow, and even suggest, substitutes for Canola or Grapeseed, even Coconut, oils. None of which I had, and truthfully I didn’t like the state of my cheap-ass vegetable oil. Thus I made the decision, since there IS noted flexibility here, to use Olive Oil instead; which I think would be rather fitting, considering the region’s Mediterranean ties, the use of olive oil and yogurt together, and just the fact that it would only make it taste BETTER.

Finally, one particular requirement leads to a fun little lesson in a daily kitchen cheat! This, like many cake recipes, requires lining just the bottom of the pan with a circle of parchment paper. We could try cutting out a circle to fit, but the bottom we trace for it would be too big. I’ve learned an easy little trick where we take our decently-sized sheet of parchment paper, fold it in half, then again in quarters, and again and again… until one ends up with one thing, triangular sliver of multiple layers. Hold this above the pan, with the point at the center, and cut it just a bit under the inside edge of the cake pan, giving it a curve as you do. Unfold and there you go: perfect fit. 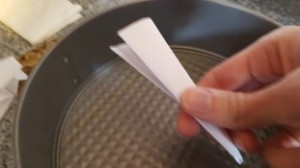 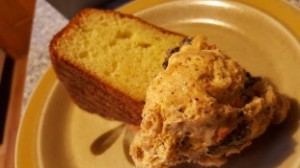 Just like a classic white birthday cake, on its own it’s soft, tender, with that great extra cake flavor and a base that allows any addition, like that lemon zest, to shine. And it may not be very distinct, but one CAN get a little bit of that yogurty sense if one looks for it. Also like any other white cake, one almost craves to pile it in whipped cream, frosting, dessert sauce, fresh/cooked fruit, whatever you can find to make it even BETTER, because you know it’d work as an awesome base. And the recipe itself turned out well, no issues I could see besides taking an extra 10 minutes of baking time than the original recipe called for.

Though let me say that a big attraction of this recipe for me was the picture of a perfectly flat, even, browned top on the cake. Which sadly did not get reproduced in this attempts, one of two reasons: either I should have given the pan an EXTREME amount of buttering so it didn’t rise in the middle, a-la soufflé technique. OR, and I’m now very heavily suspicious of this considering how the pictures on the original website are angled… they probable cut the domed top off and just turned the damn cake upside-down! The conniving old bastards! Tricking me with promises of caramelly cake crust deliciousness… I mean, I guess I got that anyway, but with a curve…

Ugh, I started this a couple weeks ago, had a brilliant idea on what would be perfect with this, and then went on vacation and forgot what it was! Not fair!

Though I will say the idea of a Milk Shake seems fantastic. This IS totally the cake+ice cream kind of thing, sort of, so I could see myself going for that. Perhaps with a boozy addition of Cream Liqueur to boot; either that or just do it straight with ice. No Bailey’s, something purely cream/vanilla-focused alongside the supporting flavors… I used to love soaking my Tres Leches with Tres Leches Liqueur, or Rum Chata.

Speaking of liqueurs, keeping things simple is definitely the name of the game for this not-complicated dessert, and a nice, chilled glass of Limoncello would be a great way to match and improve the sweet cake without overriding any subtle flavors; matches the lemon zest too. Not to mention the recipe I got this from DID have a lemon icing glaze.

Though truthfully I think any simple, sweet fruit or creamy liqueur or non-complicated liqueur-based cocktail would work wonderfully with this, especially if one took the cake up a notch with some frosting or whipped cream and any accompanying toppings. But if one wanted to try something a bit off-base and fun, then perhaps a nice, simple glass of demi-sec or other semi-sweet sparkling wine, a regional French Cremant or Prosecco or something. Interestingly, I might actually AVOID Champagne, as I think the fruity-fresh-tart flavors are more preferential than the very yeasty-toasty-buttery notes that are so predominant with the classic methods so prevalent in that region.