I haven’t done a hearth bread in a while, so I think I’m due, especially after the recent decision to actually follow through with cooling my main finished loaves to completion before slicing for proper textural results. Searching the book for a decent one, however, has had me come to the understanding of how few my options are becoming for ‘new’ breads I can make that don’t require the extra-long and special processes that Rye bread creation requires, or basically the needing of a ‘barm’ (will discuss when I finally get into ryes). Certainly I’m at the point where I’ll need to make some official decisions soon, whether it’s revisiting recipes or finally delving into the more continuous-intensive process of having to use and refresh the living starter culture.

That aside, I did find one intriguing thing that stood out, a simple recipe to re-try the hearth technique that also offered a distinctly unique personality: Tuscan Bread. It’s a very simplistic bread recipe… and I mean VERY simplistic. This is one of the only breads that is completely Salt-free; likely developed by poorer Italian families who couldn’t afford the expensive seasoning back in the day. This thus leads to a bread that is rather ‘bland’ compared to others, which is why the Italians often load it with super-flavorful pastes and other toppings. Also, since there’s no salt, the yeast isn’t kept in as much check, allowing it to ferment and release as much gas as fast as it wants, which is probably why they also employ another interesting technique. Instead of a pre-ferment, the mix of yeast and flour and water and such done the night before to develop flavor, it utilizes a past of flour and boiling water left overnight. If a pre-ferment was used, it’d likely eat through almost all the natural sugars before making the dough itself the next day, giving us no doubling action. The paste is much more bland, but still allows for some flavor release from the starch gelatinization; or at least that’s the idea. We’ll just have to see how it turns out!

ofter, stickier doughs do seem to produce a more idealistic result, or at least it seems to have a better chance at it, so I’m going to continue trying not to be so cautious of leaning towards that way from now on. Besides, once it bulk ferments with some of that oil covering, it’s just about as easy to handle as not-so-sticky dough.

Apparently there are plenty hearth bread recipes, not just the really long and unmanageable baguettes or other weird shapes, where it’s okay to cook the bread on parchment paper while it’s on the baking stone, if not even the sheet tray on top of the baking stone. Applying this to more recipes will make the transfer much easier and faster, again minimizing oven temperature reduction as much as possible, and I don’t have to worry about deforming my shapes as I fail to slide them from a metal pan even with all the damn cornmeal I sprinkled on its surface.

If there are any other recipes that call for the ‘2 cup water steam bath,’ it’s okay to let the oven stay at its highest temperature for a while to better hold its heat. My worry was that all the water would evaporate and I’d run out, but after the initial 10 minutes there was still probably ½-1 cup left in the pan.

If choosing to bloom the yeast in water, don’t do it in ALL the water from the recipe; I’m rather sure I initially over-moisturized. Next time the yeast is just going in half, supposing I’m making that adjustment to the recipe myself, and the rest is only added to the point of balance. Truthfully I worry that I may have eliminated the chance for the olive oil’s flavor to be detected by having to add in what amounted to quite a little bit of extra flour.

Never have had I had a bread that, even when fully cooked, is so distinctly ‘flour-y’ in flavor. You really can TASTE that flour paste made the day before, almost as if one mixed in mashed potatoes… but flour. Ultimately reminiscent of a cross between those cottage loaf breads, my favorite kind from the store, and a classically crusty baguette/roll. It emphasizes itself even further after leaving the bread alone to cool, which I’m not sure how I feel about that; but this ‘extra plain’ flavor does allow that particular toasty sweetness the browned crust develops to actually be tasted a bit more. It’s a shame that it doesn’t keep that delightful crunchiness it has right out of the oven, but most hearth breads don’t; letting it rest without touching has it go chewy, probably from the extra steaming. But still glad I left a giant round to cool off all by itself, now it’ll actually last and in the ideal ‘bread state.’ 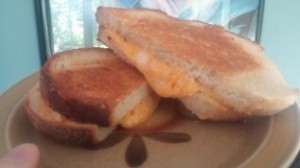 Surprisingly, doesn’t impress me that much as toast, but it does make a damn good grilled cheese…

Currently putting up a fight but it seems to submit a little more-so in the end.